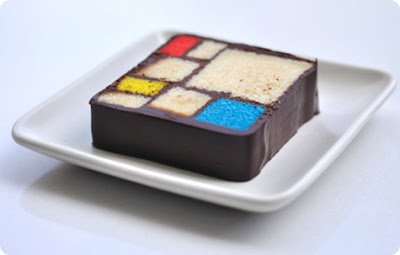 This amazing cake, based on the art of Piet Mondrian was designed by pastry artist Caitlin Williams Freeman from the Blue Bottle Cafe at the SFMoMA. Other folks have tried to reproduce it. Since today would have been Mondrian's 140th birthday, I thought it was the perfect time to try and whip up a cake in his honour. 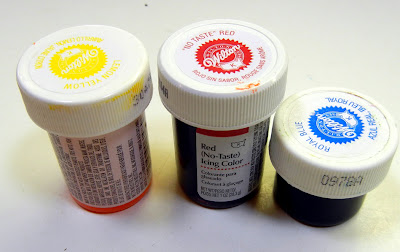 I started with red, yellow and blue food colouring. 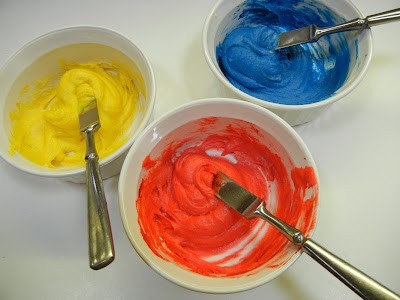 I made a classic pound cake and split the batter in half. Then with that half, I split it in thirds and added the colour to each batch of batter. 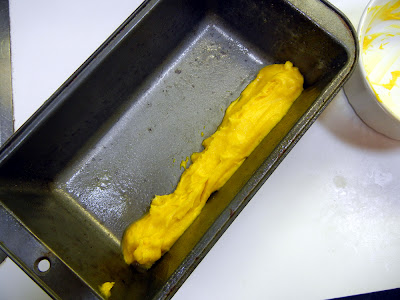 In a greased pan I laid down the colours side-by side. First the yellow... 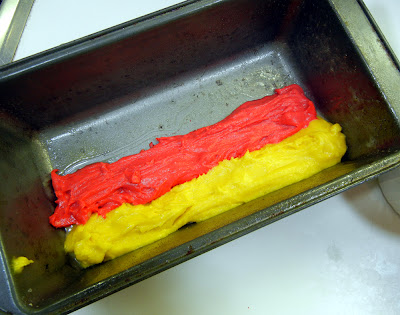 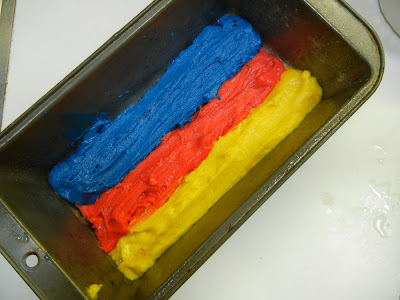 And then the blue. 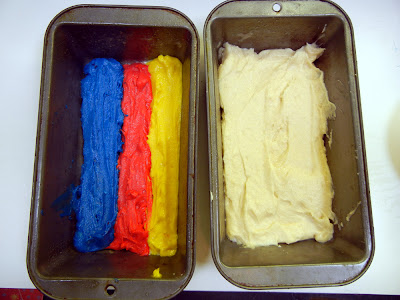 The balance of the white cake was put in another baking tin... 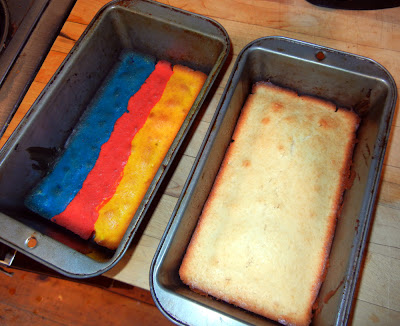 And I baked them for about half the time suggested. 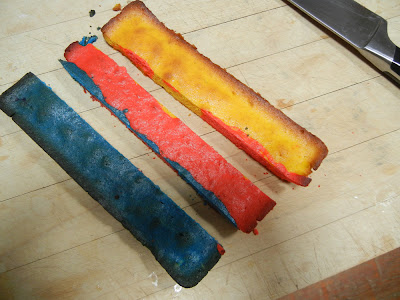 I split the three colours into strips... 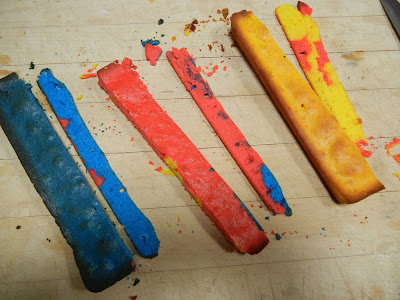 And trimmed off any overlapped colour. 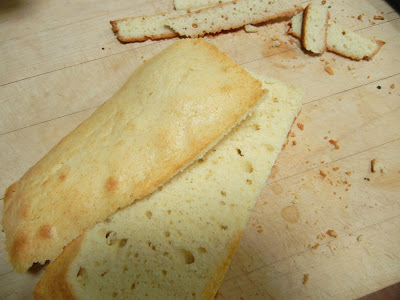 With the white cake, I trimmed off the dome to make the cake flat. 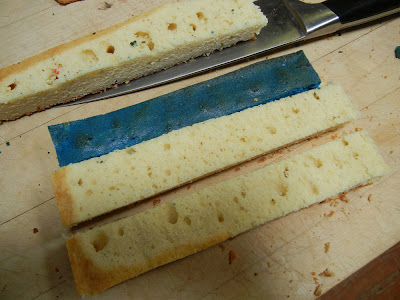 Then I started the construction project. Two white strips and a blue for the bottom layer.

I evened out the white a bit more to make them all the same height. 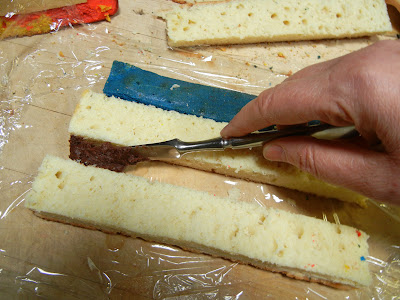 Then I added chocolate icing between the strips to attach them all together. 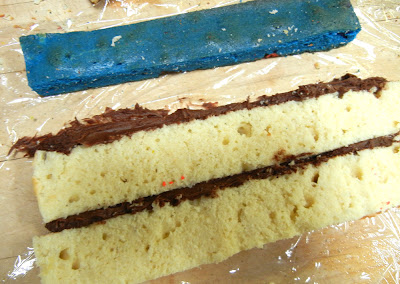 More chocolate icing between the strips... 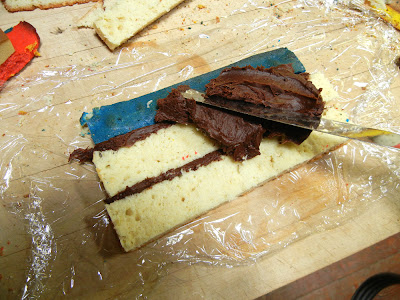 And then icing on top of the first layer... 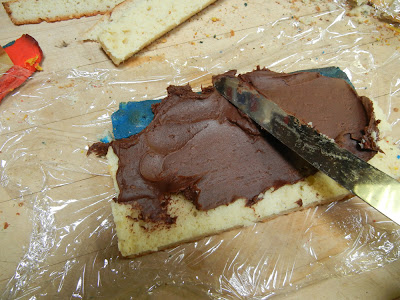 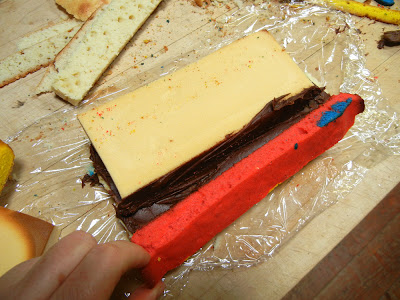 Then I started to build the second layer. Oh, oh. I didn't have enough white cake so I added a trimmed up section of Sarah Lee pound cake from the freezer and then a strip of red for the second layer and covered that with chocolate icing. 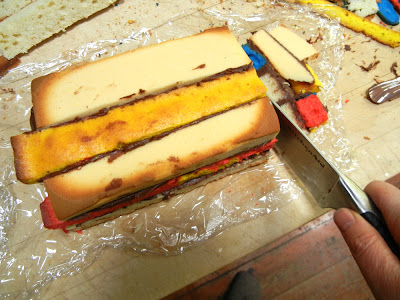 The third layer had the yellow strip and two white strips on either side. I trimmed both sides to make the cake an proper rectangle and then... 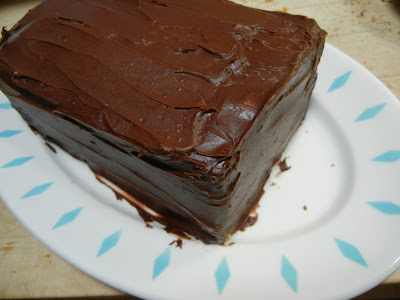 I covered the whole thing with chocolate icing. 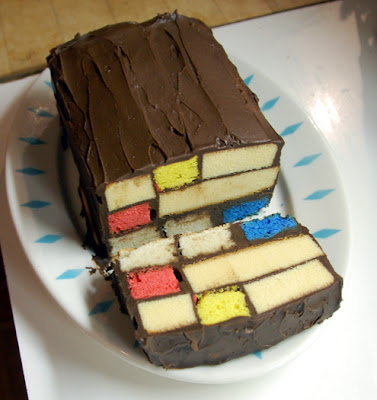 It's not as perfect as Ms. Williams Freeman's version. Hers has a lot more panache but for a first attempt, I think even Mondrian himself would have gotten a kick out of it. Happy 140th birthday Piet!
Posted by Ronna at 6:30 AM

Wow - that looks like a lot of work. But the results are really fun.

Hi Ronna,
I was just sent your blog by one of the bakers at our SFMOMA cafe - we are so impressed with your work! Congratulations on such a great representation of the Mondrian cake, it is so well done! Keep up the great baking, and be sure to be in touch if you're ever at the SFMOMA, we'd love to have you over for a piece of cake!
caitlin

I really like this cake and can't wait to make it for some one.

I can't believe I got to eat a slice of this world-famous creation!

Thanks for sharing this fantastic recipe!
My first visit to your blog (but not the last)
Greetings from Barcelona
:)

Thank you for sharing this simplified Mondrian cake. My 4.5 yo was inspired by the original and we used your version to recreate at home. We did a gluten free / dairy free version.

What a great idea!
After reading your blog, I did it twice. It had a lot of success!
And I posted a video on Youtube:
https://www.youtube.com/watch?v=ufZj2h69a3I 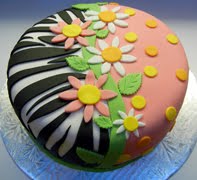 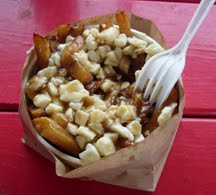